The Eight of Cups card is a sign of change or transition is one’s life, suggesting that you need to walk away from your existing routine in order to achieve fulfillment and success. 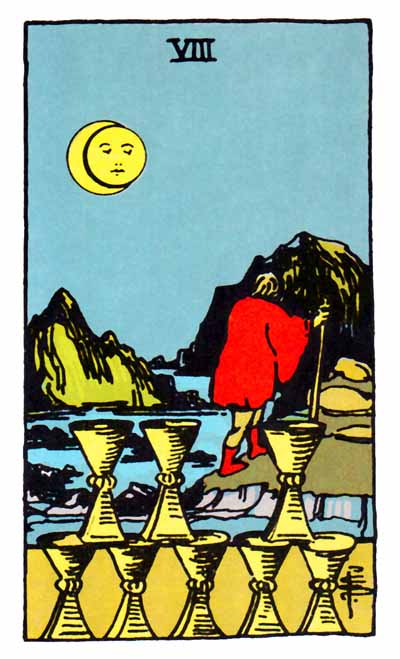 In the Rider Waite deck the Eight of Cups card depicts a man walking away from the eight cups that lay on the ground behind him. They are not placed symmetrically, leading the eye to assume there’s one cup missing. The imagery suggests that the man lacks emotional fulfillment and has turned his back on the eight cups with a sense of disappointment.

The scenery is dominated by mountains and sinuous rivers, representing the challenges ahead of him. The moon illuminating the night sky is symbolic of avoidance and the desire to escape a person or situation unnoticed.

The Eight of Cups as a Person

The Eight of Cups represents a person with a profound desire to escape the material world in order to find true happiness and success.

This person has recently come to terms with their true selves, realizing that their priorities aren’t shared by the people they’re surrounded by. This could be the result of a breakup, a career change, or even a deep spiritual journey.

People represented by the Eight of Cups are often introverted, more concerned with the inner meaning of things and matters of the spirit than they are about making new friends. As such, it can be a challenge to get to know these people. They tend to be heavily guarded individuals who need a lot of time before feeling comfortable enough to open themselves up.

In the past they’ve often surrendered themselves to peer pressure, which in turn has caused them to lose track of their personal goals.

The Eight Of Cups Upright

Pulling the Eight of Cups in the upright position may mean that you feel compelled to walk away from a disappointing situation. This could manifest as a career change, a new lover, or the end of an old friendship.

There are negative undercurrents in your love life. While nothing is impossible, your chances of salvaging this relationship are low and likely not worth the work. The fights you’ve been through and the obvious differences between the two of you are becoming increasing difficult to overcome.

If you’re single, finding this card in a spread could be a sign that something new is about to unfold. You may have recently ended a poisonous relationship or faced a period of profound emptiness as a result of being single for too long — but that’s now over. If you put yourself out there, someone new and exciting is bound to come your way.

This isn’t a positive card when it comes to one’s career. If you’re currently unemployed or in an uncertain position, it’s not the result of a poor work ethic or lack of qualifications. The blame lies elsewhere — whether it’s the economy, poor management or some other factor that’s out of your control, be prepared for challenges ahead.

It may be time to branch out into something new, or possibly start looking for a way to supplement your income until you regain your stability.

Financially, you’re going through a rough patch right now. However, the recent downturn isn’t entirely of your doing. Mismanaged money or perhaps an overly ambitious investment strategy is causing you significant financial strain.

Pay closer attention to your investment portfolio and bank accounts. Careful budgeting should quickly put you back in good financial standing.

All the negativity in your life is taking a toll on your health, both mentally and physically. You may feel like everything bad that’s happened recently was out of your control, but those feelings are counterproductive.

Whether you’re responsible or not, the only way for you to succeed now is to move on and move forward. Break the cycle by getting a full medical check-up, doing regular exercise and eating a balanced diet.

The Eight of Cups Reversed

You may feel as though you’re constantly drifting from one place to the next, and the people around you have noticed this as well.

The Eight of Cups in the reversed position indicates that you’re very much on the fence about whether you should stick it out or walk away from the multiple challenging circumstances in your life right now. Listen to your heart and trust your instincts before making any important decisions about your future.

The Eight of Cups in the reversed position suggests that you’re unable to let go of an unhappy relationship for fear of change and being alone. You’re great at pretending everything is fine, but you aren’t helping your relationship by maintaining the status quo.

If you’re single, you’re likely scaring off potential partners by being far too clingy and intense early in the dating phase. Your lack of self-esteem is your biggest enemy, allowing partners to walk all you over while you continue being at their beck and call.

You won’t find love until you resolve your own issues — understand your true worth and what you really want from a partner.

Despite being unfulfilled in your job, you’re staying where you are because of an irrational fear of change. You’ve come to accept minimal satisfaction in life because you aren’t motivated enough to pursue better options.

That being said, it’s time for drastic change. In this position, the Eight of Cups is challenging you to push yourself into unknown waters, as that’s where the potential for great success lies.

Your career and your money are very closely linked. The uncomfortable changes you need to make to your career path will affect your finances. While you may have been holding onto your job for the steady paycheck, this new wave of change coming your way may rock the boat financially for the foreseeable future.

Keep in mind that if you’re truly passionate about this new project, the money will soon follow.

It’s time to acknowledge the negative habits that have been damaging your health. The only way to change the cycle is to break it. Unlike your job or your relationship, your health is something you have the power to change for the better in the immediate future.

You know what you need to do — it’s entirely in your hands.

The Eight of Cups in the past position represents a situation from your childhood that has shaped your personality. You feel the need to escape and prefer to abandon people and situations rather than face them head on.

In the present position, this card represents the motivation you need to finally leave the unfulfilling relationship, job, or circumstances that have brought you nothing but negative energy. The blinders you’ve been wearing will finally be cast away, leading to a better understanding of yourself and others.

In the future position, this card indicates you’re on an exhausting path that will soon leave you worn out. You’re being warned that bad news and circumstances are coming your way. However, this isn’t inevitable — it’s in your power to change the course of the future.

The Eight of Cups is often fearful and on the fence about difficult choices in life. The cards it’s paired with provide more insight on the best path to take.

Eight of Cups and Fool

The Eight of Cups paired with the Fool card indicates that you’re leaving one path behind to pursue another that may seem more beneficial and exciting. People around you will be confused and potentially hurt by your decision, as it may come across as selfish or opportunistic.

Eight of Cups and Ace of Cups

You are overcoming your low self-esteem and have chosen to walk away from the poisonous relationship you’ve stuck in for far too long. The Ace of Cups indicates that you now fully understand your worth. You must now find your own happiness, which could potentially manifest in a new love interest.

Eight of Cups and Five of Pentacles

The bad luck you’ve had in your career and finances have caused you to lose everything. The Five of Pentacles indicates that you’ve had to sell or give away some of your belongings, or may be forced to do so in the near future.

Eight Of Cups: Yes or No?

There’s a constant teetering toward and against change with this card. However, the feelings of indifference, avoidance, and overall negativity associated with the Eight of Cups suggests that the answer is “no”.