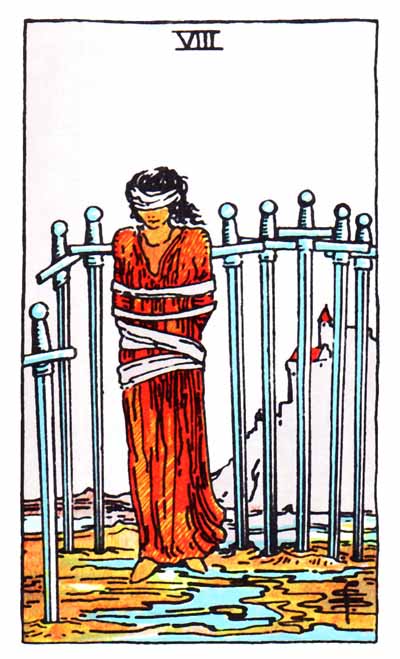 The eighth Minor Arcana in the Suit of Swords represents insecurity and the propensity to limit one’s self. It warns that a simple task may appear overwhelmingly difficult to you.

In the Rider-Waite deck, the Eight of Swords depicts a blindfolded, raven-haired woman. Her head is tilted down, suggesting that she is resigned to her capture rather than struggling to free herself. She sports a burnt orange gown that flows to the ground, representing her unwillingness to free herself.

A strip of white cloth loosely binds her arms — it’s apparent that she could easily free herself if she tried. Eight long swords are planted vertically around her in an uneven, rushed semi-circle, yet she seems paralyzed by the fear of cutting herself on them.

A town looms high on a mountain in the background, suggesting that she is not far from home. Though she appears to have been abandoned by her captors and could easily return home, she remains still, head bowed, awaiting her fate.

The Eight of Swords as a Person

The Eight of Swords represents someone who tends to make a mountain out of a molehill.

They have a tendency to erect barriers around them, creating problems and limitations as a way of self-imposing inaction. Though unconscious, their efforts restrict their ability to participate in activities around them and limit their social mobility.

Their inaction stems from a place of fear and insecurity, and they must consciously work towards identifying these fears to counteract their self-imposed limitations.

The Eight of Swords represents a lack of clarity and an inflexibility in one’s perception of the world. You may find yourself overanalyzing events and interactions, trying to understand the hidden meaning as a way of protecting yourself from perceived threats.

You feel the need to always be safe, and run numerous scenarios in your head as a way of ensuring your preparedness. The Eight of Swords often feels anxious, convinced they’re in far more danger than they actually are.

You find yourself struggling between rational and irrational thoughts, often erring on the cautious side and deciding your next move based on “what if” scenarios. Though this may seem calculated and objective, it demonstrates a lack of self-confidence.

The Eight of Swords denotes insecurity, mostly in yourself, but this is often unconsciously projected outwards upon those closest to you.

If you are single, you are likely in a suspicious state. Despite putting up a confident front, you don’t feel desirable. When meeting new people and potential partners, this translates into skepticism and suspicion.

This state of distrust causes you to build up walls and find creative ways of protecting yourself from rejection.

If you’re currently in a relationship, the Eight of Swords represents rocky roads ahead. You are likely twisting your partners behaviors, however innocent they may be, in order to fit the scenarios you’ve created in your mind. As such, they may feel attacked, exasperated, and unable to sympathize with you.

Communication is the best remedy. Talk to your partner about how you’re feeling and be open to the possibility that you’re acting out of fear. Sometimes, being able to laugh at yourself is the best way to relieve stress and bring some sorely needed perspective into your thought process.

As the embodiment of inaction resulting from fear, the Eight of Swords represents a tendency to poke sticks into your own spokes. At work, you may feel as though you are advancing too fast, that your situation is “too good to be true.”

You may be sabotaging yourself as a way of regaining control over a given situation, or of directing the conversation in a way that gives you that control. Though this may grant you a sense of safety, your actions — or lack thereof — ultimately hurt you.

The Eight of Swords may also indicate that you’re in need of a confidence boost. Your career may be suffering as a result of this, especially if you work in consulting, banking, or law. Any area that requires communication and convincing will be impeded by your hesitative state.

Be kind to yourself, and just try to do your best. You won’t win all of them, but you’ll find breaking free from your mental shackles to be the hardest part.

Drawing the Eight of Swords in a money reading means that you’re feeling economic stress. You may be counting your pennies, despite being in a financially stable place.

In fact, these issues have very little to do with your actual situation. No matter how much you have in the bank, it will never be enough to assuage your fears. It might be worth talking to a professional to help you move past this anxious state. Otherwise, you’ll be accumulating wealth without being able to enjoy it in the slightest.

Though you can’t see anything wrong with your physical health, you feel as though something hidden is eating you up from inside. You scrutinize every pinch and pain, assuming the worst.

You also balk at the idea of seeing a medical doctor. You consciously despise the “ignorance is bliss” mentality, yet you find yourself unable to book that appointment. Instead, you remain in a state of limbo — you want to know that everything is fine without having to face your fears or accept difficult truths.

When reversed, the Eight of Swords denotes a change in mentality, that you are breaking free of your self-imposed restrictions. You are starting to shed your mental shackles, a slow and difficult process that requires constant effort.

Though your metaphorical bindings are coming loose, you are still very careful of your surroundings. You are gradually coming to understand that the swords around you pose no real threat, yet you often remind yourself of how sharp they are, how dangerous they could be.

This habit will be hard to kick, and the process of trusting yourself and your surroundings is a long one.

If you are currently single, the reversed Eight of Sword suggests you’re feeling insecure yet optimistic. You are reaching out to those around you, even if it means you might get hurt. Your walls are still there, but you’re trying hard to bring them down for the people you are meeting. A little explanation of your past can go a long way, and you may even meet someone with the same insecurities as you.

If you are currently in a relationship, the reversed Eight of Swords represents your desire to come clean to your partner about something. It has been weighing you down, leaving you feeling guilty. No matter how small or big this is, it’s been taking up a lot of your mental space.

Your partner has likely noticed you being distant, distracted, and unresponsive. Understand that your actions are confusing to them, and revealing what has been troubling you will remove that weight from your shoulders.

In the workplace, you are coming out of your shell and taking greater risks. This will not go unnoticed by your peers or your boss.
The reversed Eight of Swords can be a very positive sign for your career, as you and your peers start realizing the extent of your potential.

You must find a happy medium between your self-limiting tendencies and the rush of confidence that comes with success. Remember, the swords are still there, but you can easily avoid them if you trust yourself to do so.

Financially, the reversed Eight of Swords represents growing ease and disposable income. You are able to spend your hard-earned money without feeling guilty or insecure about it.

You trust yourself to make sound decisions with regard to your capital, but this doesn’t mean you’ll never feel economic stress again. You will have to figure out when your inner alarm bells are justified and when they are a mere resurgence of your insecurities.

In a health reading, the reversed Eight of Swords indicates that you are feeling rather confident with regards to your mental health. You’ve been working hard on making positive changes to your life.

However, focusing on your mental health comes at the expense of your physical well-being. Pay attention to your body and look after it — if you feel any pain, don’t ignore it. Instead, calmly examine what you are feeling, and get a check-up if it reoccurs.

In the past position, the Eight of Swords denotes that you’ve often acted out of a strong desire to avoid confrontation. You have focused on absolving others of guilt, pain, and anxiety, to the detriment of your own well-being.

You acted in ways that would make people feel comfortable around you. You laughed at their jokes that weren’t funny to spare their feelings, smiled when they made you feel uncomfortable, and refused to point out their despicable behaviors.

In the present position, the Eight of Swords represents an ongoing struggle in your life. The right path is obscured by your fears and a bombardment of unsolicited advice from your family and peers. In this moment, you need to focus on your inner rational voice, rather than the one begging you to take the safest, least risky path.

The Eight of Swords in the future position suggests that the outcome of an important future event will be decided on whether you choose to act out of fear or rationality. You’ve often acted on the safe side, taking into account every possible outcome to prevent anything bad from happening. Don’t act brashly, but recognizing your overcautious nature will help you make an informed decision in the near future.

As a strong symbol of timidity and hesitation, the Eight of Swords modifies other cards to add these intangible aspects of the inner psyche to the reading.

Eight of Swords and Queen of Cups

Together, the Eight of Swords and the Queen of Cups represent an inability to follow your intuition. You feel pulled in several directions, struggling to reconcile your inner hesitations and your strong desire to create, to extend a helping hand and to nurture.

This pairing denotes uncertainty stemming from being pulled in different directions.

Eight of Swords and Moon

When combined with the Moon, the Eight of Swords becomes a symbol of resolution. You gain clarity of mind, and in a moment of lucidity and rational thought, unimpeded by self-doubt, you see the way forward.

Eight of Swords and Knight of Pentacles

The Knight of Pentacles is ambitious and career driven. This pairing suggests that you are financially well-off, yet your material belongings have not granted you a sense of accomplishment or satiation. Instead, you find yourself wondering what this was all for. Where you once thought this accumulation of wealth would set you free, you now feel trapped by it all.

You may feel weighed down by loans, mortgages, and other financial obligations. While you can’t shirk these duties, try compartmentalizing them and making a to-do list, a step-by-step plan that will allow you to gradually free yourself from the bonds of credit.

The Eight of Swords represents insecurity, indecisiveness, and inaction, so the answer you seek will likely be “no.”