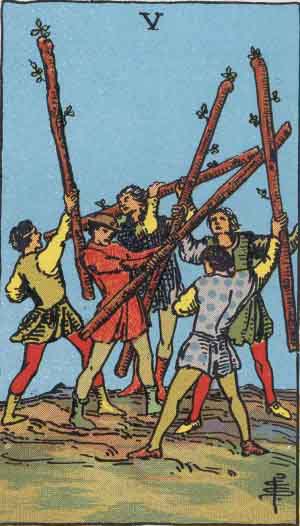 Like all fives in the tarot deck, the Five of Wands represents disagreement and conflict. This Minor Arcana card also indicates that a challenge must be met, and urges you to rise to the occasion.

The Five of Wands depicts five men, each holding a large wand and waving it around wildly. The wands are brandished like swords as the men appear to be in direct conflict with each other. Furthermore, each man is wearing a different color, symbolizing that it’s every man for himself.

Upon first glance, this suggests confrontation and discord. However, the wands are all either in the air or hitting one another — no wand is striking a person. As such, the image can also be interpreted as a friendly competition or showcase of skills.

The Five of Wands Card as a Person

A person represented by the Five of Wands is a lost soul, searching for themselves and for meaning in life. They often have low self-esteem and don’t believe that they are capable of accomplishing their goals.

Despite this, a Five of Wands person remains loving and empathetic. Deep down they want to be special and stand out, but tend to suppress these feelings because of their fear of judgement. Once they’ve accepted the validity of their wants and needs, they may gain self-esteem and be truly happy.

Even when upright this card has negative meanings, so prepare yourself for friction and conflict.

The Five of Wands is a sign that you’re in a fiery relationship. You and your partner fight often and have wild tempers. It’s up to you to figure out if this is something you like about your relationship or if you’re tired of always being at each other’s throats.

If you’re unhappy with the constant bickering, pick a time when you both are calm to discuss your emotions and needs.

If you’re single, this card indicates that your love life is somewhat chaotic. You’re actively dating, but remain unsure of what you want in a partner. Feel free to explore your options — just don’t string anyone along.

You’ve been clashing with your colleagues. Incompatibilities in personalities and work styles have led to conflict, causing a decline in your productivity. You’ll have fight harder for the things you want and to stand out in the workplace. Don’t get too wrapped up in all the drama — focus on your responsibilities and you will eventually succeed.

You’ve been arguing with your partner or family about money. Unfortunately, these arguments will continue until you can get a handle on your finances. Avoid overspending, and don’t lend money to people you don’t entirely trust.

You will overcome an old injury that has been flaring up intermittently, or win a battle against chronic illness. The Five of Wands card can also be a sign that you are feeling overwhelmed by stress and anxiety. Meditation and exercise will help you calm down and improve your overall health.

Unlike most reversed cards, the Five of Wands has many positive meanings in addition to the negative ones. It represents resolution, cooperation, and coming to agreements.

The rough patch in your relationship is coming to an end. Fighting and dishonesty will be a thing of the past as open communication becomes the norm for you and your partner.

If you’re single, this card indicates that you’ve been going through a bit of a dry spell or are stuck in a dating rut. Jump-start your romantic life by seeing someone you’d never go out with under normal circumstances — you might be surprised by where this leads you.

A reversed Five of Wands indicates that a workplace conflict is coming to end. You will make amends with your colleagues or boss and work as a team to complete an important project.

This card can also mean that you plan on leaving a highly competitive industry such as finance, sales, or law for a career that has a better work-life balance.

A period of financial turmoil is to be expected in the near future. A job loss or economic crash will make it difficult for you to keep control of your money. You will have to fight even harder to make ends meet.

Avoid conflict with your partner and family by focusing on the practical aspects of money management instead of the emotional ones.

You’ve been trying to recover from an illness or injury for a long time, but to no avail. Trying a new approach — be it traditional medicine or a holistic treatment — will produce significant results in the near future.

In the past position, the Five of Wands means that you are dwelling on an argument or a falling out that happened long ago. While you didn’t realize it at the time, this incident greatly shaped the direction your life has taken. In order to grow and progress as a person, you must let go of this past conflict and forgive.

When found in the present position, the Five of Wands represents struggle or adversity. You have been going through a difficult time lately and are feeling anxious about how things will turn out. It’s best to be mindful and avoid lingering on negative thoughts so that you can get through this rough patch.

The Five of Wands in the future position is a sign of upcoming conflict. This clash is unavoidable, so don’t fear it — take it as an opportunity to address issues in your relationships.

The Five of Wands is a weak and passive card. Its meaning varies, depending on the cards with which it is found.

Five of Wands and Star

Instead of being hard on yourself for not being as productive or responsible as you’d like, take time to have fun, be reckless, and enjoy the small joys of life. The Star card is a clear sign that doing this will free your mind and lead you down the path towards success.

Five of Wands and Three of Cups

You’ve been feeling a lot of envy lately and it’s starting to corrode your sense of self. Take a break from social media and the constant comparisons with others. Instead, use that time to figure out what you really want from life.

Five of Wands and Emperor

You will challenge an authority figure — symbolized by the Emperor card — over some sort of injustice. Speaking up about this issue will cause some people to unfairly criticize you and talk behind your back. Despite this, don’t be swayed by their pettiness — as long as you’re following your moral compass, you will triumph in the end.

Five of Wands and Hanged Man

This combination means signifies that you’ve been feeling left out as of late. The Hanged Man card is a sign that you’ve been drifting away from a group of friends, or feel excluded from a project at work. It might be your instinct to demand inclusion, but be wary of overwhelming your friends and colleagues. Instead, put yourself in situations where they’ll have to interact with you and soon things will be back to normal.

The Five of Wands suggests that you are being challenged in some way. Because of this connotation, the answer to your question is no.