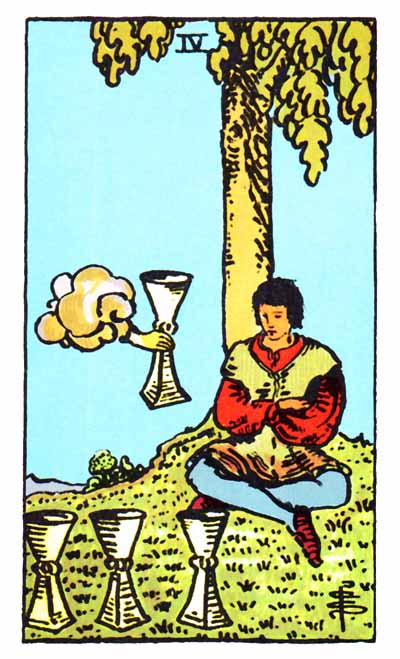 The Four of Cups represents the human tendency to take things for granted. The universe continues to offer you opportunities, but you don’t always recognize them.

The answers to your troubles are right in front of you. Instead of dwelling on your problems, focus on the solutions.

In the Rider-Waite deck the Four of Cups depicts a man sitting in contemplation under a tree at the top of a mountain. Despite his fertile, calm surroundings, his expression is glum.

On the ground directly in front of him lie three gold cups, while another is held in the air next to him by a floating hand. His deep state of meditation prevents him from noticing or caring about these offerings.

The Four of Cups as a Person

The Four of Cups as a person is dissatisfied with their current state of being. This is someone who lacks the motivation to pursue happiness, resulting in missed opportunities that would otherwise fulfill their needs and desires.

“This card is full of resistance,” says Lori Lytle of Inner Goddess Tarot. “A magical hand offers a golden cup to the figure on the card, but it is clear that they want nothing to do with it.”

These people typically take things for granted, often missing the point of what could and should be valuable experiences. As such, the life of someone represented by the Four of Cups often lacks excitement and happiness.

This card in the upright position is a sign of new opportunities flowing in your direction. However, you’re constantly turning them away. It’s possible these opportunities simply hold no interest for you, or that you’re feeling overwhelmed by what you already have on your plate.

“When the Four of Cups appears, it is wise to examine opportunities that come your way — especially in the area of love and relationships — but it is likely that you have a good reason to reject them,” Lytle explains.

In a love reading, the Four of Cups appears as a warning that your relationship is losing its magic. While this may be a hard reality to accept, continuing on with this relationship will bring nothing positive to either of you.

Lytle advises: “In a love reading, what is being offered to you is more of the same old, same old, and the time is right to break old behavior patterns that aren’t serving you well. If you are feeling dissatisfied or bored with your romantic situation, formulate a strategy to get out of that rut.”

If you’re looking to begin a new romantic relationship, this card can be taken as a sign that one of your prospects may not be right for you. They could be hiding something or only revealing the parts of themselves they know you find most attractive.

As a lover and romantic partner you tend to get bored easily and don’t do well when the attention is taken away from you. If you’re single, you would be well advised to look inward and start giving some serious thought to what kind of person you’d most likely bond with in a serious relationship.

The Four of Cups indicates that you’ve grown bored with your current job. Your unhappiness will eventually lead to poor performance, which will stop you from progressing in your professional life.

If you find yourself in a position where you can’t afford to change jobs or take time off, it’s important that you at least try to find the motivation to work hard in order to stand out.

Comparing yourself with others will cause you to miss important financial opportunities that could change your entire situation.

Set more realistic personal goals that will prevent you from feeling as though you’re not succeeding. Focus on the positives of what you’ve so far accomplished and stay hopeful for the future.

You need to reevaluate how you’re caring for yourself. If you’ve been sick, ask yourself if you’ve made the right lifestyle changes to prevent this sickness from reoccurring in the future.

If you’ve been putting off health-related resolutions such as exercising more, eating better, or getting more rest, it’s time for you to put these things in motion.

The Four of Cups reversed calls for a period of introspection and withdrawal from the outside world.

You may be feeling uninspired or disappointed by the world around you. Your tendency to compare yourself to others should be put on hold during this time of introspection.

If you’re single, drawing this card indicates that you are finally emerging from a period of solitude where you weren’t at all interested in building new relationships. You may have withdrawn from the world due to a bad breakup, but you’re truly over it now and ready to start dating again.

If you’re in a relationship, you may be realizing that there’s something seriously wrong between you and your partner. It’s either time to give up on this relationship or prepare to work extremely hard in order to repair it.

You’ve been going through a stagnant period professionally. However, that’s about to change due to new opportunities that are arising. In the reversed position, the Four of Cups is telling you that your career is about to take a positive turn.

If you take the time to stop and look around you’ll soon discover new financial opportunities you hadn’t considered before. While you’re highly motivated right now, make sure you follow your projects through to the end or all your hard work will result in yet more missed opportunities.

The Four of Cups is a reinvigorating, positive sign in the reversed position. Your outlook on life may have been negatively affected because of ongoing health issues but positive vibrations are coming your way.

This change will lead you down a spiritual path marked by gratitude and appreciation.

Pulling the Four of Cups in the past position could be an indication that the foundation of your current situation is the result of opportunities you neglected in the past. You may have walked away from a fulfilling relationship, or missed out on an important career move.

This may lead you to feeling bitter, wishing you had seized the opportunities that would have led to a better future. You tend to blame everyone and everything but yourself for these mistakes. In order to move forward you must learn to accept the past.

In the present position, the Four of Cups indicates that you are closed to solutions that would actually help you resolve the problems in your life. This may manifest in your denying love to both yourself and those who care about you, or stubbornly ignoring a better way of doing things.

In order to progress you need to look in the mirror and be honest about your behavior — acknowledge that the defense mechanisms inside of you are hindering your growth rather than nurturing it.

This card is the most beneficial in the future position. There is a certain wisdom in the Four of Cups that will also apply to you with time, as you grow older. Eventually, you will understand what drove your past negative experiences and learn to avoid them.

The Four of Cups in combination with other cards tends to dampen the mood of the reading. If a positive card precedes the Four of Cups, it becomes a warning that the opportunity at hand is not all it’s cracked up to be.

Inversely, when a positive card is drawn after the Four of Cups it can be indicative of a breakthrough. You’re finally abandoning your skepticism to pursue the opportunities in front of you.

Four of Cups and Temperance

This combination is a sign that you’re ready to abandon the excesses in your life in order to pursue peace. The Temperance card indicates that you’re able to avoid temptation and focus on the opportunities for growth around you.

Four of Cups and Ace of Swords

The Four of Cups represents the human tendency to take things for granted. This combination suggests that you are speaking your mind and expressing yourself in ways that may not be agreeable with your loved ones.

Four of Cups and Ace of Wands

This pairing indicates that you’ve mastered a certain skill set. The Ace of Wands suggests that you know what to do and how to do it, but most importantly, you know how to conduct yourself and only reveal the sides of your personality that benefit this process.

The answer is no. Now is not the time to deal with the situation at hand — the issue needs to be set aside until a later date.