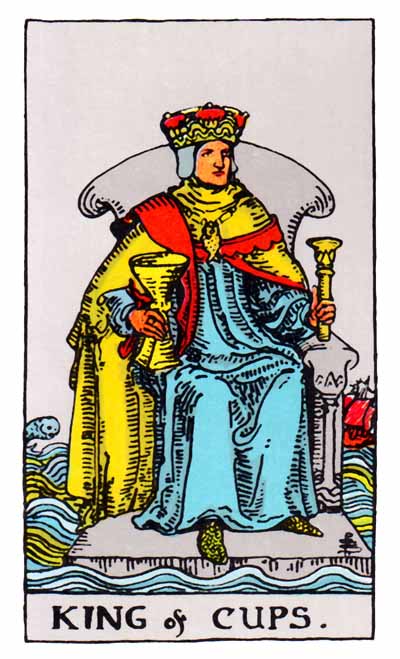 The fourteenth card in the Cups suit, the King of Cups represents warmth, honesty, kindness and fair play.

He tends to appear when we are emotionally stable and symbolizes serenity in the face of adversity, calmly reminding us that we too possess the inner wisdom and maturity to rise to the various challenges life throws at us.

In the Rider-Waite deck the King of Cups tarot card depicts a king sitting on a throne that’s surrounded by water. These calm waters symbolize the fine line where the conscious and subconscious minds come together.

He wears a necklace with a fish-shaped amulet, representing his creativity and spirit thriving within the still waters that surround him.

In the waters behind the king is a ship to his left and a fish jumping out of the water to his right, representing the physical and metaphysical worlds respectively.

He holds a gold chalice in one hand and a gold scepter in the other, which again indicates balance and harmony, portending good things on the immediate horizon.

The red and yellow colors on his cape symbolize passion and intellect, while his blue cloak represents wisdom.

The King of Cups as a Person

It would be easy to mistake the King of Cups as a masculine card, but given the Cup suit addresses emotions in general, it’s actually a fairly balanced card in this regard.

The King of Cups represents a person that possesses a perfect balance of positive male and female energy. As such he is kind, loving, generous and of pure heart. He’s also a very worldly man with great emotional intelligence, and projects an aura of quiet authority that commands respect — something his friends, colleagues, and even casual acquaintances instinctively afford him.

While at times he can appear distant with little interest in the affairs of others, rest assured that he’s still taking notes and is a benefactor who only wants the very best for you. He’s naturally diplomatic and sometimes gets involved in political issues, but he’s rarely, if ever, an actual politician.

In many respects, King of Cups people are masters of the emotional realm.

A powerful symbol of balance and harmony, when the King of Cups appears in your spread you can be confident your immediate future will be full of promise.

If you’ve been having a rough time lately, recognize that it’s only a temporary situation — you’ll soon be entering a period of peace and prosperity.

You’d be hard pressed to find a better card in a love reading than the King of Cups, particularly for women who are looking for a long-term partner to settle down with.

If you’re already in a healthy relationship you can rest comfortable in the knowledge that your partner’s expressions of undying love are sincere and their motivations genuine.

However, if you’re in a relationship that’s starting to turn sour, the appearance of the King indicates that while the relationship isn’t likely to improve and will soon come to an end, there’s a genuine Prince Charming waiting right around the corner for you, and you have no reason to fear being alone for very long. Your romantic life is only going to get better now.

With respect to finances you are going to need to sit down with a pen and paper and start budgeting.

This doesn’t mean your money situation is about to take a turn for the worse, only that you have a few expensive habits you can’t afford and need to start being more responsible with the money that you do have.

You may feel as though your contributions at work haven’t received the recognition you deserve. And while that may indeed be true, it doesn’t matter anymore, you are about to be celebrated in a big way. This could manifest as a major job promotion or being nominated for and winning a prestigious award.

The King of Cups in a career reading signifies big things at a high level, meaning it’s not impossible you could find yourself in a leading position at your workplace before too long.

If you’ve been having a lot of health concerns lately you can let go of your worries — the King of Cups represents only the most positive of outcomes.

Have faith in the competence and abilities of your health providers, relax, and enjoy your life. No illness is about to sneak up on you and ruin it.

When reversed, the King of Cups is telling you to get a better grip on your emotions. You’ve allowed them to get way out of control and doing so has enabled a situation to develop that is doing you no good.

Remember that the center never holds, things are always in a state of flux, and that to find serenity you need to go with the flow as best you can. True happiness is never that far away, in spite of how distant it may feel sometimes.

Finding the King of Cups reversed in a love reading is not a good sign. If you’re in a relationship it indicates that one of you is having a tough time emotionally and it’s negatively affecting your feelings for one another.

You may not be treating your partner with the love and respect they’ve always afforded you without even realizing it, or the situation could be reversed and your partner is treating you poorly. Incidents of infidelity are quite probable at this time.

If you care to save this relationship you may first need to separate for a short period to reevaluate and find the mental clarity to appreciate its worth. It’s quite possible you may determine it’s not worth much at all.

You are at risk of falling victim to fraud. A con artist or some unethical business organization has you in their sights and is determined to separate you from your money. As such you need to be especially vigilant with your finances at this time and never forget the old adage — “if it’s seems to good to be true, it probably isn’t.”

There is something which you desire very badly but has always been frustratingly elusive, either the realization of an important goal or some material object. Your relentless devotion to seeing this desire fulfilled is leaving you vulnerable to exploitation. Be wary.

In a career context, the King of Cups reversed can portend emotional strife between you and one of your male colleagues.

This is a battle you cannot allow yourself to take personally because this individual is highly irrational, ruthless, cunning and emotionally unstable. What they really need is therapy, however, this is somebody you need to work alongside five days a week, so you need to tread carefully when dealing with him in light of his dysfunctional, potentially even dangerous personality.

You need to watch your behavior and be especially vigilant with regard to your drug and alcohol intake, which is in danger of spiraling out of control if you aren’t careful.

There is something in your life right now that is causing you to seek comfort in the false promise of intoxicating substances. You need to do some real soul-searching and determine what’s been causing you to act this way and rectify the situation before you do real harm to yourself and those around you.

In the past position, the King of Cups indicates that something which used to be a cause of great concern to you is about to come back in to your life. It may require you to seek professional guidance in order to effectively deal with it.

In the present, this card implies that a crucial benefactor who will be of tremendous help may soon appear in your life. You can only benefit by following their guidance.

In the future position, the King of Cups indicates that you need to follow the guidance of some still unknown entity who will help you find balance in your life. The importance of following the advice of this being cannot be underestimated.

When the King of Cups appears in a spread, it’s a promising sign that something major is about to happen — something destined to make your world a better place.

King of Cups and Five of Pentacles

When paired with the Five of Pentacles, the King of Cups becomes an indication of forgiveness. Whatever your personal circumstances, expect to forgive or be forgiven.

King of Cups and Nine of Pentacles

When the King of Cups is found in a spread with the Nine of Pentacles, this signifies abundance and an important streak of creativity.

King of Cups and Knight of Pentacles

It’s time for change in your current workplace or possibly a change to your whole career when the King of Cups and the Knight of Pentacles appear together.

King of Cups and Queen of Cups

When the King and Queen of Cups are brought together, you can anticipate that a significant personal or spiritual connection will intensify, becoming more meaningful and profound.

King of Cups: Yes or No Questions

Because the King of Cups is all about balance, the card is neither particularly positive or negative. Hence, whether to answer yes or no is unclear.