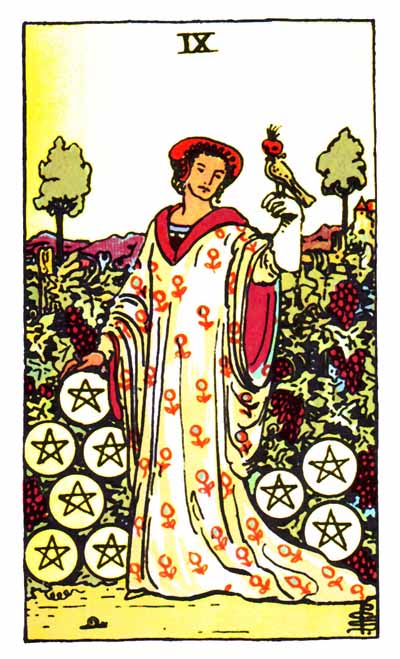 The Nine of Pentacles is refined, accomplished, and ready to enjoy the fruits of her labour. This is a good sign for your career and an especially significant card when found in the future position. Financial independence and peace of mind are coming to you.

In the Rider-Waite deck, the Nine of Pentacles depicts a mature woman strolling through her vineyard, which is heavy with grapes and golden coins — signs of her material accomplishment. On the woman’s arm is a hooded falcon, disciplined and under her command.

The garden is rich with the rewards of her efforts. Each vine has been carefully planted, watered, and pruned. This symbolizes prosperity, self-discipline, possessions, and hard work paying off.

Just as she has trained her bird to learn to restrain its passion, the Nine of Pentacles has cultivated her instincts and uses them to seek out and possess whatever she desires.

The Nine of Pentacles Card as a Person

As a person, the Nine of Pentacles generally represents a woman. The number nine suggests the end of a cycle — this woman may be entering menopause and slowing down, or about to enjoy a new start due to pregnancy and a child.

She is independent, confident and holds herself with an air of dignity. She appreciates the finer things in life, and doesn’t worry about money — her hard work has afforded her luxury. She takes proper care of herself and spends plenty of time outdoors.

Dark days are over, your time has come. The upright Nine of Pentacles stands for confidence, prosperity, and self-reliance. Through hard work you have achieved a certain standard of life, and by all rights you should enjoy it. Pamper yourself and enjoy the finer things in life!

If you’re coming out of a relationship, put all the experience you gained with your previous partner into practice. Now might be the time to stay on your own for awhile and enjoy your independence.

If you’re in a relationship, this is a sign to give your partner some space and focus on creative projects. You will need to be diligent if it’s going to work.

If you’re single, you may be attracting more positive attention than you think. People around you are noticing your strength and sensuality. Love could be right around the corner.

The Nine of Pentacles upright is a good card with regards to your career. You are about to reach new heights in your work and finally reap the rewards of your many sacrifices. If you are in business, this points to upcoming profits.

It could also speak to a period of rest and a new direction, such as retirement.

The Nine of Pentacles is also a good omen for your finances. You are on the cusp of realizing the benefits of prior hard work. Financial independence is on the way. If you have investments, now could be a good time to take some money off of the table.

If you’ve been having health issues, pulling the Nine of Pentacles is a good sign. If you’ve been undergoing treatment, your diligence is about to pay off. You are going to turn an important corner in your recovery path soon.

The reversed Nine of Pentacles represents mistakes you made and the consequences that you’re now dealing with. This is about lost potential — even the richest soil won’t produce if it hasn’t been properly cultivated.

This lack of material success can also point out the effects of social deprivation, especially when coupled with a lack of confidence.

If you’re in a relationship, the reversed Nine of Pentacles can be an indication that your worries are founded. Someone may have been lying during the relationship, was unfaithful, or entered into it for the wrong reasons. One of you may be spending beyond your means, forcing the other one to pick up the slack.

If you are single, consider whether you want a relationship for the right reasons. Beware of the intentions of others. They may be looking for something from you that you don’t have or aren’t willing to give up.

This is not a good sign for your career. The Nine of Pentacles reversed usually means that if you fail, it’s because you didn’t try hard enough. If you haven’t been giving your all, now is the time to redouble your efforts.

The card in this position can also stand for situations where you could be cheated or lied to. Be very careful and review carefully before signing any contracts or agreements.

The reversed Nine of Pentacles is not a good sign for your finances. You may need to curb overspending, or set new limits and find a way to keep yourself accountable.

Now is not the time to make an all-in, risky financial or investment play. Keep it simple and stick to what works.

When reversed, the Nine of Pentacles represents a lack of discipline when it comes to exercise or nutrition. Consider making changes that could address the issues you know are getting worse. If you have been considering a medical procedure or test, best to take it and be on the safe side.

The Nine of Pentacles in the past position suggests issues related to the satisfaction of your material needs while you were younger. In one sense it refers to the childhood bliss of enjoying life’s simple pleasures, but it can also identify themes from your childhood ideas of what possessions were worth and how that still affects you today.

In the present, the Nine of Pentacles reveals a kind of earned comfort, based on money and posessions. Now is the time to enjoy yourself, while you can afford to, but be careful not to become too focused on spending as a way to make yourself feel better or you could become bored and isolated.

The Nine of Pentacles in the future position is a very good sign. Your dreams will come true and there will be a happy ending. All your present difficulties are simply the cost you have to pay in order to enjoy greater stability in the future.

When there are other cards from the suit of Pentacles together with it, the Nine of Pentacles has less effect, especially when it comes to the importance of your possessions.

Nine of Pentacles and Nine of Wands

The Nine of Wands signifies strength and resilience in challenging times, making this a very good combination. Your perseverance in your career or other endeavors will bring you material success. What’s more, you will have achieved a deep sense of pride, knowing the depths of your sacrifice.

Nine of Pentacles and Sun

Combined with the Sun card, with its symbol of the child, the Nine of Pentacles suggests an innocent sort of happiness. The child who has not begun to venture outside of its own sphere is able to experience the bliss of ignorance.

Nine of Pentacles and Hermit

The Hermit shows that with independence also sometimes comes isolation. The rich vines that surround the Nine of Pentacles keep her from seeing what’s going on in the world outside. You may need to reevaluate your relationship to your possessions and decide whether they’re actually bringing people to you or keeping them away.

Nine of Pentacles: Yes or No Questions

The Nine of Pentacles represents financial security. This could mean a period where you are finally independent, either through a business deal, a promotion at work, or due to a good investment. All your hard work is finally about to pay off. As such, the answer is probably “yes”.