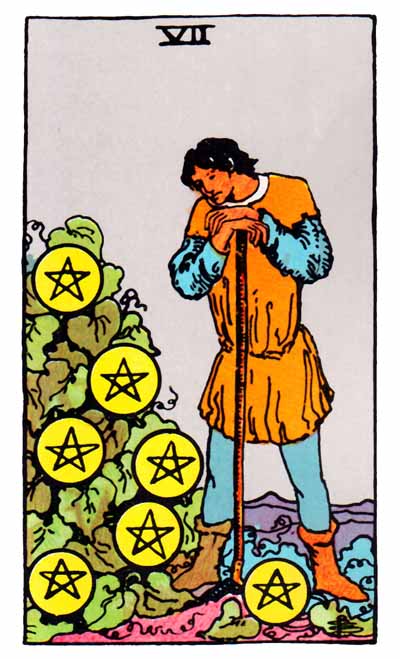 The Seven of Pentacles is a sign that you will soon be rewarded for your hard work and perseverance. However, this will most likely come at a hefty price.

Know your limits and don’t overextend yourself — your overall well-being also depends on your capacity to maintain a healthy lifestyle and positive relationships.

In the Rider-Waite deck the Seven of Pentacles card depicts a man leaning on a shovel, looking down at his abundant crops. He’s worked long and hard to nurture this land — one would expect him to be proud of his accomplishments.

The expression on his face tells a different story, however. He shows signs of fatigue, boredom, and an overall lack of excitement. Success often results from hard work, but the Seven of Pentacles serves as a reminder that taking care of yourself and knowing your limits is also crucial for long-term success and happiness.

The Seven of Pentacles as a Person

The Seven of Pentacles person is someone who doesn’t take time to enjoy life. Regardless of how much effort and devotion they put into a project, they still feel as if they haven’t worked hard enough. For them, never taking a break is the best way to succeed.

On a more positive note, those represented by the Seven of Pentacles are very patient people, constantly planting seeds that will flourish far into the future.

Overall, this card indicates that all your hard work will soon pay off. The energy you’ve put into a project or relationship will finally bear fruit. This card represents ambition, steady growth, and patience.

If you’re in a relationship, you will soon start seeing a positive impact from the efforts you’ve both put into it: you are learning to communicate more clearly and honestly with eachother. If you’ve been planning an important event or perhaps found yourself interested in purchasing a property lately, these things should come to fruition in the near future.

If you’re single, you’re likely reflecting on past experiences in an effort to determine exactly what you expect from future relationships. Try to be patient with new partners as it can take a while for the both of you to fully open up and trust each other.

Your hard work is starting to pay off. You set a goal in the past and have consistently worked hard to accomplish it. This positive attention will lead you to a crossroads. Do you move up in your current career or use your recent accomplishments to change gears? The way forward will soon become obvious.

What you’ve accomplished or will soon accomplish in your career will definitely be reflected in your finances. You’ll enjoy a boost in your income that will allow you to make big plans for the future. You may also soon benefit from an inheritance or cash in on an investment.

Now is the ideal time to set new health and fitness goals for yourself. With proper planning, nothing can stop you from accomplishing those goals. This card can also be a positive sign for a current or future pregnancy.

In the reversed position, the Seven of Pentacles may indicate that you’ve put a lot of hard work into something that isn’t paying off in the way you expected or is taking too much time to prove fruitful.

On the other hand, the Seven of Pentacles reversed can also be an indication that you’re not putting enough effort into your work. Either way, you are not moving forward in life as quickly as you’d like to.

If you’re in a relationship, finding the Seven of Pentacles in a spread may be an indication that you’re going through a rough patch. It could be that your relationship is stagnating — you’re questionning its value in the long run.

This card can also mean that you aren’t putting enough work into your relationship because you’re too caught up with your career, finances, or other aspects of your life.

If you’re single, the Seven of Pentacles reversed suggests that you’re too focused on your job and earning money to make time for love. You could also be frustrated that you’re lovelife isn’t progressing. This is most probably because you’re not putting enough effort into it — you need to get out there and nurture the romance in your life.

The Seven of Pentacles reversed is a sign that you’re putting too much effort into your work and feeling like you’re not getting anything in return. You’ve dedicated too much of yourself to achieving your material goals, allowing your relationships and personal life to come second.

In the reversed position, this card indicates bad financial planning, cash flow problems, and a loss of income. You’re likely working very hard and watching everyone around you move to the top while you remain on the same level. This may be frustrating, however, don’t lose track of your financial goals as they will eventually come to fruition.

You’re unhealthy lifestyle and disregard for your physical well-being have resulted in an illness or overall poor health. You need to stop and evaluate how your work schedule is impacting your long-term health and start tweaking your habits.

This can be a bad omen for pregnancies or any medical test results you’re waiting on.

In the past position, this card serves as a reminder that your current situation is the result of your hard work and relentless drive. This feels great because it reassures you that you made the right choices so far in life and all your sacrifice has been worth it.

In the present position, the Seven of Pentacles represents the need to reflect on your current circumstances in order to determine where you should go next. You’ve reached a new level — this period in time will determine whether you plateau or continue to progress.

In the future position, the Seven of Pentacles predicts imminent success. However, it won’t be handed to you on a silver platter. If you’re currently immersed in a big project this card indicates that the results will be positive and lucrative. You will soon begin to realize that all the good coming your way is due to your planning and dedication.

When cards are placed in combination, they feed off each other to create a more well-rounded reading. In some cases, the cards paired with the Five of Pentacles will challenge the inherent traits this card possesses.

Seven of Pentacles and Chariot

The Seven of Pentacles and Chariot combined indicate that the rewards you’ve received will continue to arrive and multiply in the future. Your success will likely become public — you’ll reach new and greater heights due to your fame.

Seven of Pentacles and Seven of Swords

The Seven of Swords denotes betrayal. This pairing warns that your current success may be claimed by others and taken away from you. Credit those who’ve helped you along the way but don’t discount your own intelligence and contributions to your success.

Seven of Pentacles and Three of Wands

A Three of Wands person is a determined dreamer. This combination suggests that your personal touch and flare will be the elements that bring you success. Understand that standing out from the crowd will also draw attention and judgement, so get all you can from this moment before you have to let it go.

Seven of Pentacles: Yes or No Questions

The Seven of Pentacles represents perseverance in order to accomplish career, financial and personal goals. It’s connected with success, but in a slow, steady manner that comes with hard work and patience.

You’ll have to wait a long time before getting what you want and ultimately deserve. As a result, the answer is “maybe”.