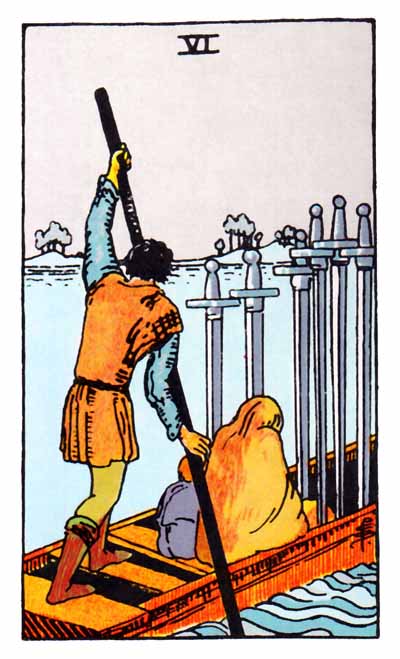 The sixth card in the set of Swords is a card of transition. This Minor Arcana usually indicates moving towards something better and more fulfilling after closing a dark or difficult chapter.

A ferryman carries a hooded woman and a child across a seemingly endless river. No faces are seen, giving the sense that these figures have turned their backs on the lives they have left on the banks behind them. The woman’s rounded shoulders display hardship, while the young child’s presence indicates new beginnings.

The water on the right side of the boat is rough, while the water on the left is perfectly calm, symbolizing that the ferryman is navigating between peace and disaster. The image conjures up visions of Charon, the fabled ferryman of Greek mythology tasked with transporting the newly deceased across the river Styx in the afterlife of Hades.

The six swords in the boat are a barrier and burden to the travelers. However, they point downwards to show that they are no longer a threat, and that hardship has, for the most part, been overcome.

The Six of Swords as a Person

If you drew the Six of Swords, it means that you are an inquisitive and strategically minded person. You are constantly looking for new approaches to problem solving and almost always succeed at overcoming obstacles.

That said, you may be too focused on solving a problem at any given moment to see the bigger picture. You may be winning the small battles in your life at the expense of the longer war.

Make sure to keep an overview of everything at stake as it can lead to greater success in the future.

The Six of Swords: Positive Meanings

Change is inevitable, and the Six of Swords heralds impending change. While transition is rarely easy, it’s necessary for personal growth and to help form new connections to the people around you.

This card generally doesn’t indicate if change will be for the better or not, but it does tend to skew towards the positive, especially when you prepare for the next chapter.

If you are single, the Six of Swords is a good indication that you should wait before jumping into a relationship. Take this time to get to know yourself better by tackling a new goal or trying something new that you’ve always been curious about. These adventures will make you a better person, and a better future partner. Love will come to you along your journey.

For those in a relationship, something is about to change the nature of your partnership for the better. An unexpected surprise will catch you both off-guard, but ultimately bring the two of you closer together.

Change is coming to your workplace, however, the card alone does not indicate whether this change is positive or negative. It could represent anything from a promotion to losing your job, but neither is guaranteed to bring you joy or misery.

Welcome change with open arms and know that regardless of the outcome, better days lie ahead.

The Six of Swords is a card of financial balance. If you’ve been struggling to make ends meet, you should find your situation improving shortly. While you won’t achieve great wealth, you will enjoy a greater amount of stability.

However, for the wealthy the Six of Swords can be a rather dire card. You’re comfortable living may be threatened in the near future. Stop any frivolous spending and focus on using what you already have to get by. Perhaps it’s time to sell some of your belongings.

Your physical health is in a good state or will be soon. Any minor pains should fade away as you’ve already put in the effort to improve the situation.

That said, you have been neglecting your spiritual and mental well-being. Focus on taking more time for yourself to regain focus. Quiet contemplation and reflection can help you achieve balance, and seeking professional guidance is highly encouraged.

While a flowing stream can smell fresh and lively, stagnant water reeks of rot. When reversed, the Six of Swords indicates a reluctance to change.

For better or worse — likely for worse — you have dug in your heels and refused to move. You are ignoring clear signs that a better life is possible and this is seriously holding you back.

If you’re single, you may be feeling like love will never come your way. You may have even closed your heart off to this possibility to avoid further pain.

However, love is closer than you think. Someone may try to pursue a relationship with you, and you may feel the urge to push them away, but this person just might be the one you’ve been waiting for. Take caution and trust your instincts, but allow yourself to love again.

If you are in a relationship, the Six of Swords could mean that you’ve chosen to stay with your partner even though they make you unhappy. Be it for financial reasons — or perhaps you have children together — you feel trapped with this partner. Your unhappiness will not end, and prolonging a damaging relationship hurts both yourself and those around you.

You may be stuck — or feel like you’re stuck– in a job or career path that is wrong for you. The stress is piling up and the work brings you no joy or purpose.

While it may be difficult, find an exit. There are always other options, even when a situation seems dire. Your work and stress load will not improve until you leave this environment.

You have been ignoring your finances for too long and the consequences are just around the corner. It’s never too late to seek professional advice on how to budget your money to avoid the impending crisis.

Mentally, physically, and spiritually, you are in need of rest and healing. An injury will take longer to heal than expected but patience is key to recovery.

Try reaching out to a friend for support during this time. Having someone by your side can drastically improve your situation.

In the past position, the Six of Swords indicates that you’ve always been true to your inner compass. You have not let the opinions or whims of others blow you off course in your journey.

This steadfast demeanor has led you to your current successes, while those who fancied themselves your advisers have been left in tumultuous positions.

In the present position, this card foretells that you will overcome the obstacles that now seem inescapable. The situation will change in an unexpected way or a new person will come forward to offer you a hand. Either way, you will be left with a new sense of peace and finality.

In the future position, the card is a beacon in a sea of darkness. While you will eventually overcome the challenges that you face, this bliss lies far in the future. There are many trials ahead, but the hard-won victories will bring you the knowledge and experience you’ll need to succeed in your life once the troubles have ended.

The Six of Swords is primarily focused on change and discarding that which you no longer need. When combined with other cards, the pairings usually foretell if change will be for the better, or if challenges lay ahead.

Six of Swords and Lovers

As the Sixth Major Arcana, the Lovers share a special relationship with the Six of Swords. The passion and connection of The Lovers calls on you to be honest and reflective.

Think about your relationship and if it’s been moving in the direction that you want. Then, speak with the other half of this relationship in a truthful way about your hopes for the future. Perhaps they’ll be on board, but if not then it might be time to cast off and leave them behind you at shore.

Six of Swords and Ten of Cups

The Ten of Cups signifies a great and overwhelming sense of joy, typically as a result of surrounding yourself with loving and caring people.

Paired with the Six of Swords, the duo indicates you’ll soon make changes in your life that will bring kind new people into your inner circle. Be open to letting down your guard and avoid pushing away those who are trying to help you on your way.

Six of Swords and Tower

The Tower is another card focused on change, however, the change that the Tower brings is typically more chaotic and sudden than that of the Six of Swords. When combined, the pair imply an impending change that you’ll be powerless to stop.

While this may bring a sense of dread, you can still prepare to face this change head on. Brace for this impact and you may emerge unscathed.

The Six of Swords is a yes, particularly in matters of creativity.