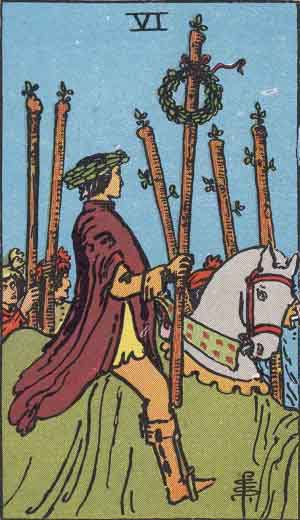 The Six of Wands is triumphant and celebratory. This Minor Arcana card represents success, leadership, and public admiration.

The Six of Wands depicts a man riding a horse through a cheering crowd, wearing a wreath of victory on his head. He also has a wreath tied to his wand, symbolizing a recent accomplishment. His horse is white, the color of strength and purity. The jubilant crowd adores him for his efforts and successes.

It’s clear that the man is basking in this celebration, not shying away from it as he sits tall upon his horse, riding proudly. This confidence is met with equal enthusiasm from the crowd who are just as happy to be in the man’s presence as he is in theirs. Being celebrated for one’s leadership and victories — and enjoying that attention — are this card’s main themes.

The Six of Wands Card as a Person

A querent who draws the Six of Wands is a highly confident and accomplished person. He or she is a natural leader who uses their charisma to inspire and persuade others. Goal-oriented, a Six of Wands person is organized but unafraid to take risks when need be. They are positive, optimistic people who love to be in the spotlight.

Sometimes their confidence and desire to be the center of attention can turn into arrogance and lead to egotistical behavior. A Six of Wands person maintains friendships with people who keep them humble. They should also be careful to avoid using their fans or followers as protection from consequences.

The Six of Wands symbolizes success, victory, and public adulation. You have worked hard to attain your goals, and those efforts are now being recognized.

The Six of Wands is a good omen for strength and stability in a relationship. You and your partner are in it for the long haul and can count on each other for support. You also tend to show off your relationship, and would like everyone to know that you’re living life as a dream couple.

If you’re single, the Six of Wands indicates that a new partner is about to enter your life. This person will be very confident and sociable. Your courtship will attract a lot of attention from others. It will be up to you to decide whether you like this newfound attention, or if you’d rather go back to a quiet life. Let your feelings for your lover be your guide.

The Six of Wands is a strong indication that a promotion is in the works, most likely to a major leadership position. It can also mean that you will receive recognition and acclaim for a project you’ve recently completed.

Your finances will be solid enough that you’ll be able to use your money for good and donate to a charitable cause. Doing this will win you the respect of others and you’ll be regarded as a great member of the community.

One of the most positive signs to get in terms of health, the Six of Wands represents a complete recovery from an illness or injury. This is especially true for chronic sicknesses that have been difficult to beat.

When reversed, the Six of Wands indicates failure, arrogance, and weakness. It often coincides will a fall from grace or a negative reaction to something you’ve done.

A troubling sign for a relationship, the Six of Wands represents instability and fragility. While you were good together in the beginning, it is unlikely that you and your partner will be able to weather difficult times.

Conflicts about family, money, and values will become wedges that drive the two of you apart. If you want to try and work things out, both of you will need to check your egos and tempers at the door and talk seriously about your issues.

If you’re single, the Six of Wands is a sign that you are being conceited and self-important when it comes to dating. While you might see it as being discerning, your pickiness when it comes to seeking a partner is making it impossible for you to find real happiness.

Insecurity is at the root of your “choosiness,” as deep-down you are afraid that others will judge you — you only accept society’s idea of perfection in a partner instead of the traits you actually like. Tackle this insecurity and you’ll find somebody that makes you truly happy.

A recent project you worked on didn’t go as planned and you didn’t get the recognition you were hoping for. If you want to get ahead in your career you must realize that any changes need to begin with you.

Admit to yourself that you have what it takes to be a leader in your field and use what you’ve learned in your setbacks to reach your goals.

You have been reckless and disorganized with your finances. While money has never been a priority to you, your carelessness is starting to affect the people you love. You must take charge of your money situation before your loved ones start to resent you.

Spending just a few hours per month keeping track of your spending and staying on top of the bills will make a world of difference.

A reversed Six of Wands is a warning of a relapse of an illness or injury that was thought to be long gone. You will need to rely on your support system during this period, so put aside any feelings of pride or stubbornness.

Finding the Six of Wands in the past position means that you have had a lot of good experiences and are often thinking about the days gone by. Avoid fixating too much on memories — it’s easy to see things with rose-colored glasses, but this can hamper your ability to live in the moment.

The Six of Wands in the present position is a sign that you’re going to get a win soon. If you’ve been going through a period of struggling, rest assured that you will be victorious once and for all. Stay humble and remember the journey that brought you here in order to fully appreciate this moment.

In the future position, the Six of Wands indicates that this is the prime time for you to set big goals for your future. Allow yourself to dream big, but be sure to write your goals down and prepare an action plan. There is no obstacle that you cannot surmount and you will forever regret it if you don’t take the leap right now.

The Six of Wands pairs well with other cards in the Minor Arcana, usually infusing the meaning of its pair with accomplishment or triumph.

Six of Wands and Three of Cups

The Three of Cups represents friendship and community. When found with the Six of Wands, the pairing represents popularity and social success. People will be drawn to you and be proud to call you a friend.

Six of Wands and Nine of Pentacles

The Nine of Pentacles on its own is a sign of self-sufficiency and enjoying material comforts. The combination of this with the Six of Wands assures that you will accomplish enough in life so that you will be able to sit back and enjoy the fruits of your labor. Overall, you will be blessed with a happy and peaceful life.

Six of Wands and King of Wands

Alone, the King of Wands symbolizes natural leadership and creative energy. When combined with the Six of Wands, it’s a sign that you will enjoy a successful tenure as a leader and that people will praise you for your innovative ideas.

Six of Wands and Six of Swords

Representing change and transitions, the Six of Swords is a bittersweet card to get. However, when paired with the Six of Wands, the duo represents a new situation going better than expected. If you get this combination, now is a great time to take risks.

Six of Wands: Yes or No Questions

The Six of Wands depicts victory, triumph, and public adoration. It’s a positive card that suggests good news — making it a yes.

What does the Six of Wands mean in a love reading?

The Six of Wands upright is a good omen for strength and stability in a relationship.

What does the Six of Wands reversed mean?

When reversed, the Six of Wands indicates failure, arrogance, and weakness.

What does the Six of Wands mean in a future reading?

In the future position, the Six of Wands indicates that this is the prime time for you to set big goals for your future.

Is the Six of Wands a yes or no card?

The Six of Wands is a positive card that suggests good news — the answer is a yes.