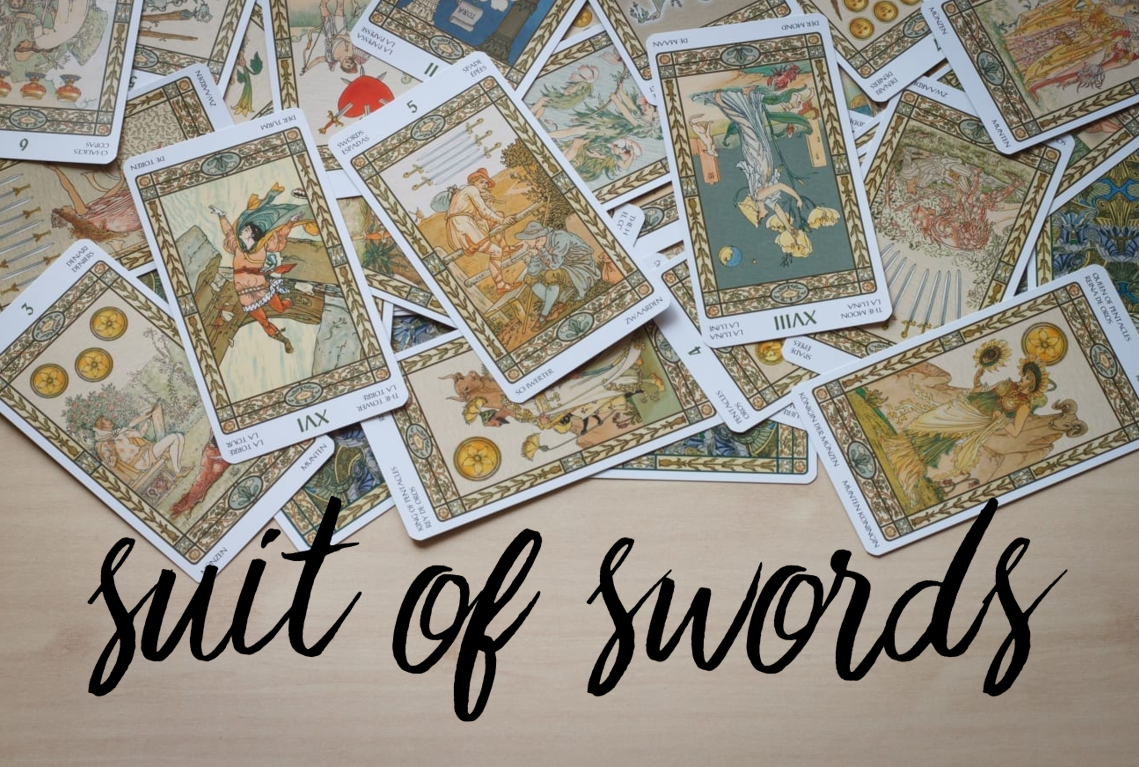 The Suit of Swords is largely associated with the conscious intellect, objective truth, and one’s perception of events as guided through a logical rather than emotional lens.

In certain cases, a reading rich in cards from the Suit of Swords may even indicate that violent conflict lurks around the corner, serving as a warning to be tuned in to one’s immediate surroundings and prepared to take action.

Swords can also indicate that serious danger or disappointment is on the horizon, be it illness, war, death, or profound sorrow resulting from romantic loss or the passing of a parent, child, or sibling.

On a more positive note, Swords cards bring attention to unpleasant truths that need to be confronted — because of their strong connection to honesty and truth, Swords cards in the upright position are often associated with justice and fairness. Reversed, they typically represent ruthlessness, deception, and confusion.

The Suit of Swords is associated with the autumn season and the element of air.

Air is constantly in motion — it’s powerful yet forever unseen and intangible, manifesting as a cool, refreshing breeze on a hot summer day, or alternately as a violent wind storm destroying everything in its path.

Swords can also be double-edged, further emphasizing the balance between positive and negative energies inherent to this Suit.

The Ace of Swords urges you to align your goals after an extended period of aimless wandering. Your newfound awareness will allow you to flourish in future romantic and professional endeavors.

The Two of Swords represents a balance of forces, both negative and positive. Your ability to navigate through emotional turmoil — inner conflict as well as conflict with others — will ultimately dictate whether the outcome for you is good or bad.

The Three of Swords suggests there is severe pain in your life right now, possibly the result of a conflict in your career, a breakup with your partner, or simply a string of unfortunate events.

The Four of Swords represents order and stability, combined with the tumultuous nature of the Swords. The double-edged sword allows you to pick your fate — as long as you listen to your mind and body when a moment of respite is needed.

The Five of Swords card represents a deep-rooted conflict in your life. This tension is most likely brought on by your tendency to blame others for your own failures.

The Six of Swords is a card of transition. This Minor Arcana usually indicates moving towards something better and more fulfilling after closing a dark or difficult chapter.

The Seven of Swords can be ambiguous in a reading, suggesting that someone around you is being disloyal or that you should free yourself from a bad relationship.

The Eight of Swords represents insecurity and the propensity to limit one’s self. It warns that a simple task may appear overwhelmingly difficult to you.

The Nine of Swords is one of the worst cards to find in a spread. Representing guilt, depression, and mental anguish, this card, also known as the Lord of Cruelty, forebodes internal struggle and difficult times ahead.

The Ten of Swords is a shocking draw, depicting death, loss, and renewal. While it may be frightening in a reading, remember that endings — even unexpected ones — bring with them hope and new opportunity.

The Page of Swords card is a sign of diplomacy and energy. It represents a wealth of mental energy best expended by following your curiosities to the rich answers they’ll inevitably lead you to.

The Knight of Swords is a sign that bravery and action are needed. Being able to compromise can be a useful skill in certain circumstances, but now is the time to hold fast to your opinions and fight for what you believe in.

The Queen of Swords is a pillar of rational thought, independence, and intelligence. She represents personal development and the road towards a mastery of emotions and impartiality.

The King of Swords calls for a head-over-heart approach, representing intellectual clarity, strength, and discipline. You need to face all upcoming challenges with steadfast determination.