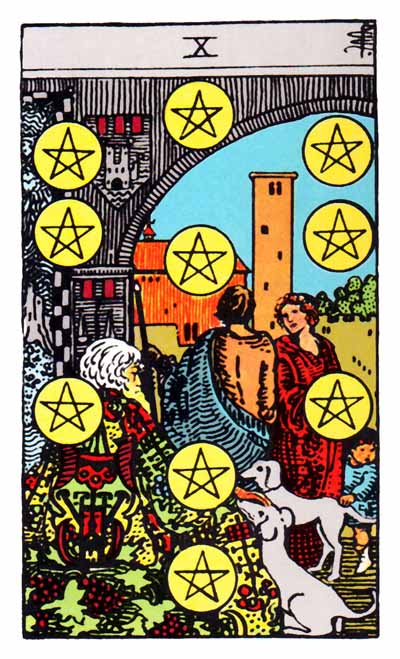 The Ten of Pentacles represents material success and healthy family relationships. It often refers to the end of a cycle and the beginning of a new, more comfortable period. This is a good sign if you are starting a business or about to get married.

An elderly man sits comfortably in front of an archway leading into a town. He wears a robe decorated with crescent moons and grapevines — an indicator of his wealth and status. In front of him are his family and two dogs. A young boy standing beside a happy, laughing couple — possibly the boy’s parents — reaches to pet one of the dogs.

The dogs represent loyalty, while the child represents new beginnings, fresh ideas, and hope. The archway is a symbol of passage or transition, whereas the town represents centers of thought, cooperation, and tolerance.

This is an endearing scene. The old man can count on the presence of his loved ones, just as he takes pride in seeing the younger generations benefit from his hard work. As such, themes for this card also include family, community, and the preservation of family heritage.

The Ten of Pentacles Card as a Person

His eyes are wrinkled like a bird’s nest, his look is tired but satisfied. His pride beams as he looks at his children and grandchildren around him: the old man depicted on the Ten of Pentacles has achieved great things, and he is now enjoying the fruits of his labor.

A person represented by the Ten of Pentacles has had a good career run and is financially independent. They are a central figure in their community or family unit, and are called upon when important decisions are to be made, especially when those decisions involve a significant financial investment.

Pulling the Ten of Pentacles upright in a spread is a good sign that eventually everything will come around the way you’ve been hoping it will. Once it does, you’ll feel extremely proud of all you’ve accomplished.

This card is also telling you to focus on your family, ensuring that their basic needs are met at all times, even if that involves self-sacrifice.​

The Ten of Pentacles is a good card to pull if you are in a relationship. Your relationship has a strong foundation — you and your partner will stay together over the long term and weather challenges together. This card can be taken as a sign of more traditional family values. Milestones such as a ring, prenuptial agreement, or even marriage may be on the way.

If you’re single, this card could mean that someone who shares your values will come into your life. This person is prepared to make a long-term commitment to you.

Pulling the Ten of Pentacles is a good omen with respect to work or education. Don’t give up if you’re going through a rough patch right now. You’re on the verge of a major breakthrough — stability and financial independence are just around the corner.

The Ten of Pentacles also suggests that the company or organization you are employed by follows traditional or conservative values.

The Ten of Pentacles represents privilege and wealth. Consider setting up trusts, insurance policies and other financial instruments in order to provide for future generations once you’re gone.

This card also suggests that an unexpected windfall may be coming your way.

Generally speaking, the Ten of Pentacles is a good card for your health. You will receive the care and treatment needed to cope with injuries or long-term illnesses.

If you’ve been having health issues, look into hereditary factors that may provide an explanation.

The reversed Ten of Pentacles represents instability, especially within a family unit. For instance, drawing this card in the reversed position may speak to old feuds, skeletons in the closet, or a squabble over an inheritance.

The reversed Ten of Pentacles is also a bad omen for your finances.

The stability of your family has been threatened in some way. This may just be a brief period of uncertainty, or it could lead to a full breakdown of your relationship. Money could be driving you apart. You may need to examine the true foundation of your union for the relationship to prosper.

If you’re single, the reversed Ten of Pentacles could mean you aren’t ready for a long-term relationship, or that you could soon become involved in a casual, unconventional relationship.

The reversed Ten of Pentacles is not a good sign for your career. If you are in a business partnership, the relationship may currently be challenged by exterior forces. It can also refer to the bankruptcy of the company you are working for, or concerns over the long-term stability of your position.

The reversed Ten of Pentacles speaks to financial failure. This may involve bankruptcy, a loss of profitability, or problems due to debt. It can also refer to legal problems over owed money or an inheritance.

If you are living beyond your means you may have no choice but to drastically reevaluate all of your financial obligations.

With respect to health, drawing the reversed Ten of Pentacles in a spread can mean that a hereditary gene is responsible for a recent and sudden change in your health.

Take a holistic approach to healing, being careful to focus on the mind as well as the body. 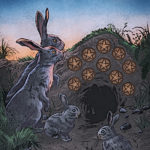 In the past position the Ten of Pentacles represents a solid foundation that brought you to where you are today. Some will have been raised comfortably while others will have overcome great challenges to arrive to where they are now.

When the Ten of Pentacles is in the present position, it’s a sign to stick with the plan — your hard work and diligence will eventually pay off. Howerver, be forewarned: when you begin earning more money than you are accustomed to, you will have to make some difficult decisions about how to use your newfound wealth.

If you’re just starting a business, finding the Ten of Pentacles in the future position is a great sign. Same thing if you are about to get married — at least in terms of your finances. This isn’t to say you’ll never experience any difficulties later on, but for the moment the outlook is generally good.

When there are multiple Ten cards in a spread, this may indicate the end of a cycle.

Ten of Pentacles and Ten of Cups

The Ten of Pentacles and Ten of Cups may signal the end of a period of wandering and the beginning of a new period of long-term stability. For couples in a relationship it can mean settling down and renewing commitment. This may involve getting married, for the first or second time.

Ten of Pentacles and Seven of Cups

This combination can describe wishful thinking about the ideal family. Make sure that you’re not getting lost in a fantasy.

These two cards together can also refer to a situation where a couple chooses for one partner to stay at home to begin a creative project or start a business while simultaneously watching over the family. The Seven of Cups can also be seen as a warning about keeping unrealistic expectations that may never materialize.

Ten of Pentacles and World

When the Ten of Pentacles combines with the World card, it denotes feeling comfortable and whole. You may take this opportunity to plan a short holiday, or simply spend the day at a spa and get pampered. Get some well-deserved rest on days when you’re able to.

Ten of Pentacles: Yes or No Questions

Security, financial independence and stability are all signs of the Ten of Pentacles. Good relationships with your partner, family members and close friends will bring good fortune. For most questions the answer is yes.