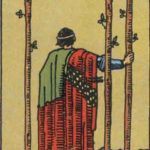 The Three of Wands continues along the path set by its preceding cards, the Ace of Wands and Two of Wands.

This tarot card involves travel, exploration, and having the foresight needed to turn possibilities into reality. It’s a positive sign, indicating success in one’s ventures.

The Three of Wands depicts a man gazing out at the sea, flanked by three tall wands that are firmly planted in the ground.

From his vantage point, the man can see everything that’s coming his way. The sea symbolizes all of life’s challenges and opportunities. The three firmly planted wands represent the man’s commitment to his future plans. His grip on the leftmost wand symbolizes his willpower.

The Three of Wands Card as a Person

A Three of Wands person is a determined dreamer. They have no shortage of grand ideas and see possibility where others do not. Their optimism is only matched by their incredible drive and tenacity.

Someone who identifies as a Three of Wands can also come off as arrogant and act like they are better than others. A downside of their unbridled optimism is that they can also be over-competitive, which often pushes people away. In short, they are the type of person who will stop at nothing to reach their lofty goals.

The upright Three of Wands is a symbol of looking ahead and planning for a bright future. You will be blessed with opportunities that require you to work hard and take risks. Your understanding of the world and of yourself will be expanded.

Your relationship is going well and progressing at a rate both you and your partner are comfortable with. You will be taking some time to travel together soon, which will allow you to learn new things about each other.

Inversely, the Three of Wands may also mean that you and your partner have the capacity to withstand the pressures of a long-distance relationship.

If you’re single, you’re in store for a romantic fling, particularly while on vacation or with someone from abroad. It may also be a sign to explore your options with a person you had previously decided you weren’t interested in.

You can see possibilities in your career that others have overlooked. This may be a breakthrough idea for a work project or an avenue to make money on the side that others have deemed impractical. The Three of Wands is a sign to trust your instincts — persevere and you will succeed.

The Three of Wands indicates that your finances will be improving soon. This is a good time to expand your business or to invest in the stock market. Spending on a trip to an exotic locale would also be a good use of your expendable income.

You will be recovering from a period of poor health or injury. After you’ve made a full recovery, you should take time to get reacquainted with your newly healed body before doing anything too strenuous. You will be blessed with a renewed appreciation for good health.

The reversed Three of Wands symbolizes a roadblock on a personal journey. You have been met with unexpected setbacks and don’t know where to go from here.

This card may also mean that you are struggling to bring your plans to fruition. In such cases, it should be seen as a incentive to get your act together.

The Three of Wands indicates that your relationship is stagnating. Your fundamentally different beliefs are difficult to overcome. One partner may want to travel or live overseas while the other does not, causing a lot of tension and resentment.

This card may also mean that a long-distance relationship has failed, and that you are not suited for that type of arrangement. If that’s the case, respect your needs and let your partner go — you will open yourself up to a romance where you get everything you want.

You are feeling frustrated by your career’s slow progression. Your growth is being stymied by an incompetent superior or slowing business. This feeling is worsened by the fact that you have turned down offers from other companies.

Take some time to plan out your ideal career situation and you will be met with success. Your new position will likely involve travel.

Your attempts to increase your net worth have been largely unsuccessful. This tension will be exacerbated by an impending financial setback such as a bankruptcy or layoff. Don’t lose hope, though — this is a sign to get more organized with your finances. You will eventually earn back the money you’ve lost.

You have been struggling with an illness for a long time. It’s causing you physical and emotional suffering, as many of your symptoms are invisible. Be patient and kind with your body — it’s working to heal you as fast as it can. You will eventually make a full recovery.

Finding the Three of Wands in the past position references a time when you were cautious and didn’t go for something that you wanted. You were likely spending too much time weighing your options, until you finally became paralyzed by choice. This card serves as a reminder that you can’t know every consequence before you act. Sometimes you just have to take a leap.

In the present position, the Three of Wands is a sign that the universe will soon present you with an offer for a new business relationship or job. You should not hesitate to accept it and devote yourself fully to this new endeavor.

The Three of Wands in the future position suggests you will achieve whatever you set your mind to. Your success will require a great deal of creativity and mental fortitude but will your hard work will eventually pay off.

When matched with a card from the Major Arcana, the Three of Wands always takes on a supporting role.

Three of Wands and Hermit

You have been feeling isolated lately and are in a bit of a slump. When combined with the Hermit, the Three of Wands is a sign that you will use practical measures to pull yourself out of your doldrums.

Three of Wands and Empress

One of the best pairings for the Three of Wands, a combination with the Empress means things in your life are lining up exactly as planned and you’re going to get exactly what you want.

It’s likely that your true love will confess their feelings for you, a family reunification will occur, or an upcoming project will be a resounding success.

Three of Wands and Death

Despite the ominous nature of the Death card, when combined with the Three of Wands it signifies an upcoming transformation in which you will purge your life of all the toxic people and thought patterns that are holding you back.

At the end of this journey you will be the person you were always meant to me.

Three of Wands and High Priestess

This pairing is a sign that you will achieve your spiritual goals and will experience self-enlightenment. Look forward to a period of deep calm and tranquility as you realize your place in the universe and what is important in life.

The Three of Wands stands for achievements, exploration, and new ventures. Its answer is yes.