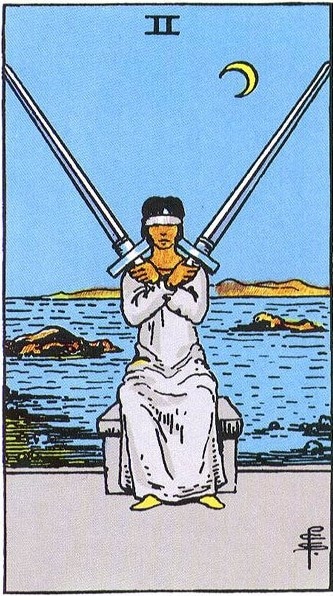 The Two of Swords represents a balance of forces, both negative and positive. Your ability to navigate through emotional turmoil — inner conflict as well as conflict with others — will ultimately dictate whether the outcome for you is good or bad.

The Two of Swords card depicts a blindfolded woman in a white robe, holding two swords crossed over her body. This imagery suggests that she’s confused about her current place in life, but can’t seem to identify the problem or solution.

The swords are perfectly aligned in front of her, meaning that she’s balanced and can therefore weigh the gravity of the upcoming situation with a clear head.

In the background we see rocky islands jutting out of a body of water. The islands represent the obstacles she’s facing — careful, considered navigation will be required to avoid collision.

The Two of Swords as a Person

The Two of Swords as a person seeks harmony in every aspect of life. They hate confrontation and toxic environments more than anything, as they believe that balance is key to living a life of peace. Their decisions greatly depend on the effect they will have on others, suggesting that this person often compromises a great deal to avoid rocking the boat.

Despite caring so much about others, people represented by the Two of Swords find it hard to talk honestly to their loved ones about how they feel. Don’t expect this individual to open up quickly in a new relationship — they’re likely to be extremely private.

The Two of Swords in the upright position suggests that you’re facing a difficult decision and are unsure of how to resolve it. You have two options, and both seem as equally advantageous as they could be disadvantageous. As such, you’re unable to make a choice. If you use both your mind and heart to weigh the pros and cons, you’ll ultimately make the best decision for yourself.

If you’re single, you may be avoiding the pursuit of a new relationship for fear of being hurt or shut down. If you’re dating many people at once, now is the time to choose who you want to dedicate your time and attention to — you can’t be everywhere at once.

If you’re in a relationship, you’re likely experiencing a breaking point. You’re afraid of showing your true feelings and often closed off or unintentionally creating conflict. You have to choose whether you want to pursue this relationship or not. If the answer is yes, then it’s time to open up and let the love in.

You’re currently facing some important career choices. You may be torn between two job opportunities, or in the middle of a work conflict that’s forcing you to pick sides.

Do your research and gather all the information you need to make the wisest decision. This will be challenging, but if you follow your gut you will choose well.

You’re likely struggling financially at the moment. You need to remove the blindfold and admit to yourself that you’re having problems. This means that you’ll need to make decisions when it comes to your budget, income and savings for the next little while in order to get yourself back on track.

Your mental and physical health may be suffering as a result of your inability to be vulnerable and admit to your own emotions. Holding it in is causing inner conflict. You’re feeling exhausted from constantly being so guarded around your loved ones.

Anxiety and depression are common in these situations. These issues which might need to be addressed with the help of a medical professional.

The Two of Swords in the reversed position indicates that your inability to express your emotions has become a source of great distress.

You’re unable to make important decisions in life because you feel overwhelmed by your own thoughts. This has been causing you to act emotionally detached and guarded with those that are closest to you.

Your high levels of anxiety are having a negative effect on your relationships. Instead of talking things out and opening up to your partner, you’ve chosen to cut yourself off from them, making proper communication between the two of you impossible.

If you’re single, the thought of dating makes you feel even more anxious, as it would force you to open up in ways that you don’t feel ready for. This may lead you to avoid dating altogether.

The best thing for you right now is to get out and meet new people, if only as a distraction from your inner thoughts for a few hours. Don’t let past experiences prevent you from pursuing new and positive relationships.

A conflict at work is bringing on high levels of stress. This could be the result of roadblocks in a project, a delayed promotion, or problems that you foresee in a project and over which you have no control. The best you can do at this time is to alert others to the issue and avoid being dragged through the mud yourself.

You’re being honest with yourself about your finances, which is a good start. The next step is to find a balanced approach that’s both realistic and consistent so that you can start putting money aside.

You’re struggling to find a healthy balance in life. You have moments of overwhelming stress and anxiety, which you fear might become a permanent state of mind. It’s important that you find balance soon, or you’ll be at risk of feeling this way more regularly.

The Two of Swords in the past position indicates that a prior setback is affecting your life in the present. The balance you so ardently seek could be the reflection of past imbalances in your family life and relationships. This could be the root of your inherent tendency to close yourself off from others.

In the present position, the Two of Swords is telling you that you’re in denial. You must confront some serious issues at the earliest. While you may be able to turn a blind eye now, one day you’ll regret your inaction if you don’t face your troubles headfirst.

The Two of Swords in the future position is a positive sign. You’re in complete control of your future and will soon see the world for what it truly is. Your newfound power will allow you to make decisive choices. More specifically, this could mean that you will have the incentive to break free from manipulative relationships.

When cards are placed in combination, they feed off each other to create a more well-rounded reading. In some cases, the cards paired with the Two of Swords will challenge the card’s inherent characteristics.

Two of Swords and Tower

The Two of Swords combined with the Tower card is a sign that a major change is about to take place in your life. Your ability to play both sides of the fence will soon be brought to a halt. You’ll have to take a definitive stance on a situation, which may be uncomfortable and cause you anxiety.

Two of Swords and Chariot

In this pairing, the Chariot indicates that a new opportunity is presenting itself, forcing you to make an important choice. This could be in your job or romantic relationships. Either way you’ll have to make a quick decision. This will challenge your tendency to overthink things and always weigh your options for extended periods of time.

Two of Swords and Devil

The Devil in this reading exposes a fundamental character flaw of the Two of Swords. You’re often your own worst enemy, and will choose to withdraw from situations that require your presence. This could be harmful in a team work project, a night out with your friends, or perhaps in a sports competition. Once this aspect of your personality has been exposed, you’ll likely lose out on future opportunities with those same people.

This card is all about weighing options and the conflict of having to choose. In order to get a positive response, you will first need to find inner peace. In that sense, the answer is maybe.