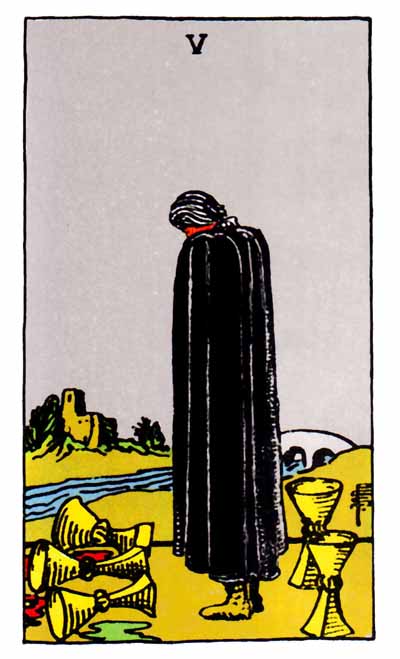 The Five of Cups tarot card symbolizes disappointment. Instead of moving forward and embracing a more positive outlook on life, you’re dwelling in the past and constantly thinking of what could have been.

In the Rider-Waite deck, the Five of Cups card depicts a man in a long black cloak looking down on three cups, which symbolize his regrets. Behind him are two cups that he has not yet acknowledged, which represent new opportunities and future success.

In the background there is a large bridge crossing a river, leading to a castle. If he is able to overcome the failures of the three overturned cups, he may finally cross the bridge and reach the security and comfort of his home.

The Five of Cups as a Person

The Five of Cups as a person is often quite hard to please. These people tend to be pessimistic, focusing on the negative in every situation. It’s hard for these people to embark upon new journeys because of their fixation on the past.

They are also very emotional, and will sooner play the blame game than try to understand their personal failures and move on. They lack self-love, often neglecting their health and well-being.

Despite all this, they can be great, empathetic friends to those experiencing tough times. However, the Five of Cups will turn on their friends and accuse them of being selfish as soon as they try to move on and embrace positivity.

The upright Five of Cups card will appear in a reading when a given situation doesn’t turn out the way you expected, leaving you with feelings of regret and disappointment.

Instead of moving on, you choose self-pity over self-love. You are too focused on the current bump in the road, playing the victim to your life’s circumstances. It’s time to set a new list of goals and move on.

The Five of Cups may be a breakup and heartbreak card, but not necessarily for the worst. While your tendency is to play the victim, it would be wiser for you to recognize the irreconcilable differences that existed between you and your partner.

If you’re single then it’s time to put yourself out there a little more. You could be missing opportunities by wallowing in your failed past relationships instead of opening yourself up to new ones.

The Five of Cups indicates the loss of a job, business, or business partner. If you’re in a business partnership, one of the key members of your team may soon abandon you. Don’t let the anger and disappointment overwhelm you as you still have much to accomplish.

A financial loss is to be expected in the near future. You may have loaned a friend money that they’ve still not returned, or an investment may not have gone the way you’d hoped. The best way to navigate this time is to make sure your remaining finances are in order.

Try not to think too negatively — instead, continue being the generous person you’ve always been. It will pay off eventually.

The health matters addressed by this card are strictly of the mental variety. The Five of Cups appears to those who’ve withdrawn from the world due to their lack of self-love, constant negative thinking, and the heavy weight of regret they carry on their shoulders.

While this card addresses mental health, remember, there is a strong correlation between mental and physical health, so you need to take a more holistic approach to your well-being.

The Five of Cups reversed suggests you’ve recently experienced a personal setback that you’ve yet to wrap your head around and accept. This is making it harder for you to open up to others. Instead you are harboring pent-up emotions that are holding you back.

You blame yourself for these failures because you haven’t talked things out with those around you. Once you do, through their advice and experience you will come to realize that this is only a temporary setback in your life.

If you’re single, the Five of Cups reversed suggests that you’re finally letting go of a past relationship and are ready to move on. You’re beginning to see opportunities for love all around you and feel comfortable socializing once again.

If you’re in a relationship, then this is a time of healing between the two of you as you are finally ready to acknowledge your past mistakes.

You’re starting to get back on your feet after having lost a job, a business partner, or a professional venture that you put a great deal of effort into. You may even be able to recoup some of your losses now.

You need to be more grateful for what you already have. This is the time for you get motivated and realize you’re capable of bringing just as much to the table as anyone else. The key is to think positive, learn to love yourself, and start embracing your true interests.

Forgiving others is not for their benefit, it’s for your own. This is a time for you to embrace the newfound positivity around you and resolve the mental health issues that have been weighing you down.

The past doesn’t matter anymore, you need to focus on your present state of mind in order to find peace.

In the past position, the Five of Cups indicates a time in your life when you experienced significant loss, whether it be the end of a relationship, the loss of a job, or the death of a loved one. That moment changed your outlook on life forever.

In the present position, this card confirms why you decided to get your cards read. It will appear for those who’ve recently experienced turmoil in their lives and feel overwhelmed. That being said, it’s also a sign that no matter how helpless you feel right now, you aren’t going to feel this way forever.

In the future position this card indicates that you’re missing important warning signs pointing towards a life-changing event. You need to start preparing for the imminent conflict and loss that is right around the corner. That said, you’ll survive this event in one piece, as the Five of Cups tends to focus more on the positive than the negative.

This card takes the positivity out of tarot card readings as it often inspires feelings of disappointment and dread. The cards drawn alongside it can help you to anticipate and understand these negative emotions.

Five of Cups and Lovers

When combined with the Lovers card, the Five of Cups portends a devastating breakup. You may be planning to end a relationship without knowing just how hard it’ll be when it comes time to have the conversation. You’ll either mask your feelings until no one is around or break down in tears unexpectedly.

Five of Cups and Emperor

This pairing indicates the death of a parent or a drastic separation from someone you are very close to, who is represented by the Emperor card. The loss, however, may force you to become more independent as you’ll no longer be able to turn to that person for help or guidance.

Five of Cups and Sun

While most Five of Cups combinations inspire dread, this one is telling you that a great opportunity is waiting right around the corner. The Sun is coming out for you, don’t let it go to waste.

The disappointment and discontent associated with this card mean that the answer to your question is no. This is a regretful card, representing sorrow and the lack of appreciation for what you do have in life.