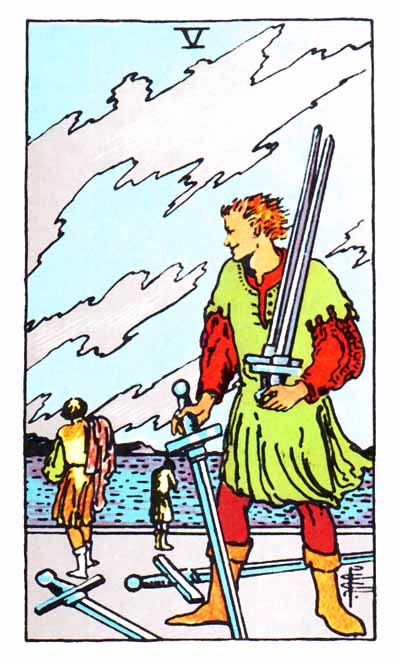 The Five of Swords card represents a deep-rooted conflict in your life. This tension is most likely brought on by your tendency to blame others for your own failures.

Left unchecked, this situation could spiral into a vicious cycle of hatred. Handle it with grace and you will move on to accomplish great things.

In the Rider-Waite deck this card depicts a man picking three swords up from the ground while looking over his shoulder at two men walking away from him.

Two other swords lay on the ground as if a battle has been fought and lost. The background shows a cloudy, threatening sky, which signifies that although the battle at hand may be over, there is still more to come.

The Five of Swords as a Person

The Five of Swords as a person is a bully who wants to win at any cost, especially if it means making others fail. They are conflict-driven people who are uncomfortable around competing personalities. They’re also very good at playing on other’s weaknesses to get what they want.

Such individuals believe that if they don’t defeat others, others will defeat them. They are also delusional dreamers — their narcissistic, self-aggrandizing nature makes it hard for them to admit their shortcomings.

In the upright position, the Five of Swords suggests that all the conflicts you’ve created around you have left you isolated in life. You believe that it’s more important to be right than to listen to anyone else’s side of the story.

It’s crucial that you pick up these pieces and mend fences while you still can.

You’re stuck in a cycle of conflict started by your inability to let things go and constant need to prove your point. This pattern is ruining your relationship and you can’t even see it. The point of a relationship is to be open and allow your partner to express themselves, even when you don’t agree.

If you’re single, you refuse to learn from past mistakes and will therefore continue to fail in any romantic relationship you initiate. You should get off your high horse and acknowledge your faults, but also understand that nobody is perfect.

Your negative attitude and tendency to gossip are causing more harm to your work environment than you realize. You’ve become consumed by your clique and spend an inordinate amount of time feeding office drama. Your productivity is impacted by this, and your bosses are likely to notice — if they haven’t already.

There may be some deception involved with regard to your finances. Either the person you’re entrusting to deal with your money is leading you in the wrong direction or you’re lying to yourself about your financial standing.

You must learn from your mistakes and stop sabotaging your financial stability. It’s time to come up with a budget and stick to it.

The challenges you’ve put yourself through are draining your energy. Your tendency to engage is self-sabotaging behavior has had a direct impact on your emotional and physical well-being. This card is a warning sign. If you take it seriously you can turn things around before it’s too late.

The Five of Swords in the reversed position can bring peace to the current conflict in your life. The flip side, however, can be less positive. If you’ve ignored the warning signs, it may be too late to mend fences. Those around you will start to hold you accountable for your actions and conflict-driven behavior.

This can be a good sign for your relationship. The constant conflict you’ve been experiencing in your personal relationships may be coming to an end due to your newfound ability to make compromises and allow others to be right for a change.

This requires a lot of work on your part — work you must be fully committed to in order to enjoy a successful long-term relationship.

Pulling this card suggests that a workplace conflict may be coming to light. Your ability to compromise and arrive at a mutually beneficial solution will ultimately determine your standing.

On the other hand, this could also be a sign of your professional demise. The person you were gossiping about may have caught on and is now out to get you back. It’s also possible that your bosses have had enough of your mediocre work performance. They may decide that enough is enough, without allowing you much of a chance to prove yourself.

The supporting card you’ve pulled will help distinguish which path you’re headed down.

Your financial worries will come to an end soon, but only if you’ve been sufficiently disciplined. If you’ve entrusted somebody with your finances, make sure you’re being respectful of their opinions — rubbing them the wrong way could very well come back to haunt you.

As long as you make the necessary sacrifices and commit to a healthier lifestyle, you will stay on the path to recovery and well-being. Don’t give up, even in the presence of road blocks. Instead, try to overcome these obstacles.

The Five of Swords in the past position indicates that the failures you’ve experienced are the result of your cockiness and overestimation of your abilities. In order to succeed, you must be honest with yourself about your strengths and weaknesses.

In the present position, this card suggests that your unrealistic attitudes have caused you to experience failure and defeat. Your mistakes have brought you much pain and disappointment, but it’s how you move forward that will determine if they were learning experiences or not. Don’t point the finger at others. Instead, try to understand where you went wrong and how you can best improve.

In the future position, the Five of Swords indicates that you’re prepared to accept your losses with grace rather than dwell on your lack of success. Victory often comes after defeat, however, it’s how you learn from these failures that determines the result.

When cards are placed in combination, they feed off each other to create a well-rounded reading. In some cases, the cards paired with the Five of Swords will challenge the inherent traits that this card possesses.

Five of Swords and Three of Wands

The Three of Wands is generally viewed as a positive sign. However, this combination indicates that all your focus is temporarily invested in a work project. As a result, you’re letting everything that isn’t connected to this project fall by the wayside, especially your relationships.

Five of Swords and Eight of Cups

This pairing shows that your selfishness and need to point the finger at others is rooted in past emotional abandonment, either from your family, friends or romantic relationships. The Eight of Cups urges you to determine what has caused you the most pain in your abandoned relationships and work to resolve it in your mind and heart.

Five of Swords and Temperance

Your desire to assert yourself in the world and conquer it is rooted in your need to prove someone else wrong, either in the past or present. Make sure you understand this, otherwise you could shoot yourself in the foot. The Temperance card suggests moderation and balance: success should always be for your own happiness, not to prove others wrong.

This card suggest conflict, selfishness, discontentment and pain. This could be as a result of loss, defeat or abandonment. The need to prove others wrong at any cost is rooted in low self-esteem. Nothing associated with this card is positive, therefore, the answer is no.